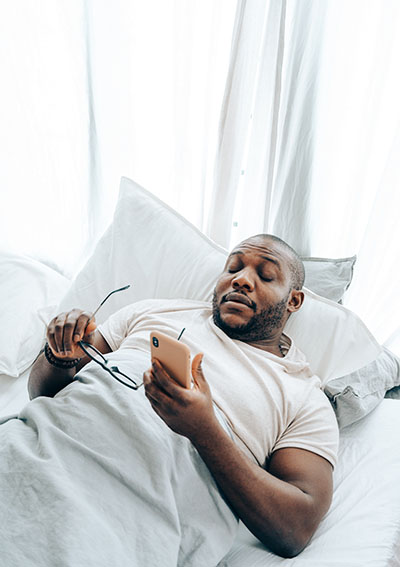 David had suffered a number of symptoms for 18 months following a viral-type illness and cough for which he was admitted to hospital for a couple of days. Six months before, he had been diagnosed with possible Epstein-Barr-Virus which lasted for three months, although this was not confirmed with testing.

Following discharge from hospital, David developed symptoms of nausea, abdominal pain, extreme fatigue, brain fog, stuttering, feeling like he was ‘hungover’, severe painful headaches, aching joints and panic attacks. David felt that several foods were triggering his symptoms and was struggling to know what to eat. He introduced meat back into his diet, having been vegetarian for over 25 years, to see if his energy levels would improve and also tried excluding gluten, but this made little difference. His symptoms were affecting his ability to work as a teacher and severely affected his social life and activity levels.

David visited his GP who performed several investigations including a stool test, urine test, MRI scan and blood tests. His stool test had revealed Helicobacter Pylori infection for which he received a course of antibiotics. Otherwise, all results were reported as normal within NHS reference ranges. He tested negative for coeliac disease, although had been excluding gluten for some time prior to testing, questioning the validity of this result.

The First Consultation: Getting Deeper into David’s Story

David completed an extensive health questionnaire prior to his initial consultation along with a three day food and lifestyle diary. This enabled me to assess and research David’s case to identify any potential biochemical imbalances and factors which may be causing his symptoms.

David had no relevant family history of note and had received his childhood immunisations. He had been a vegetarian for over 25 years and had received regular vitamin B12 injections over the last 5 years for a confirmed B12 deficiency. David reported being previously fit and healthy, enjoying active outdoor hobbies, going to the gym and enjoyed his work. Since the onset of his symptoms, David self-medicated with CBD oil and turmeric complex, but had not noticed any appreciable benefit.

David related the onset of his current symptoms to the viral illness requiring hospital admission, and although he had taken a long time to recover from possible Epstein-Barr-Virus just a few months earlier, the symptoms didn’t present at that time. He felt the nausea and abdominal pain worsened following antibiotic therapy for his H. Pylori infection and noticed that most foods were now triggering his symptoms, particularly the headaches, brain fog and aching limbs. David was becoming increasingly anxious about his productiveness in the workplace and not knowing what to eat in social situations with friends, causing panic attacks at times..

David’s symptoms appear to be related to his viral illnesses, indicating a compromised immune system and inflammation. In particular, the brain fog, fatigue and headaches suggest a degree of neuroinflammation. This could be as a result of dysbiosis (imbalance of gut bacteria induced by antibiotic therapy and H pylori infection) and increased intestinal permeability (impaired gut lining) which can lead to disruption of the gut-brain axis. If the gut lining is impaired, toxins and bacteria can enter the bloodstream and cause inflammation all over the body.

Brain fog, nausea, headaches, joint aches, fatigue and gut symptoms can also be associated with SIBO (small intestinal bacterial overgrowth), where bacteria ferment high fibre foods in the small intestine, or a histamine intolerance as a result of mast cell activation by the immune system (cells involved in the inflammatory response which release histamine). We discussed the notion that the Epstein-Barr-Virus could have been reactivated as a result of inflammatory immune response with the subsequent viral illness.

David’s symptoms appeared closely linked to his viral illness and indicated a compromised immune system. The chronic inflammation as a result of his body’s immune response, along with antibiotic therapy, likely caused an imbalance in gut bacteria, compromised his gut lining and allowed unwanted bacteria and toxins to filter into his bloodstream. Due to David’s intolerance to many foods, his diet was now severely restricted. He was losing weight and at risk of nutrient insufficiency or deficiency. We discussed the possibilities of histamine intolerance and/or small intestinal bacterial overgrowth, as his symptoms could also fit with either of these.

Comprehensive stool tests and SIBO breath testing were discussed as being clinically relevant options for David. However due to financial implications, he wished to leave these as considerations for the future should diet and lifestyle changes not prove effective.

His GP had performed recent blood tests, including vitamin B12 (an important nutrient involved in energy production that cannot be obtained from plant-foods alone), which were mostly within optimal ranges as per functional medicine guidelines. However, vitamin D is another important nutrient for the immune system and gut health and as this had not been tested, David agreed to approach his GP to get this performed to assess current levels.

The aim of the plan was to calm the body’s inflammatory processes, heal the gut lining and rebalance the gut microbiome to support the gut-brain axis and relieve neuroinflammation. We discussed that many of the foods David reported as triggers for his brain fog and headaches were high in histamine, so we agreed to adopt a low histamine diet approach in the first instance.

Specific nutritional supplements were recommended to support the immune system, gut microbiome, gut healing and the clearance of histamine. David’s vitamin D level results from the GP returned as normal, indicating a need for a maintenance dose only throughout the winter months.

David was recommended to stop taking his CBD oil (as a nutritional therapist, we cannot advise on this) and his turmeric complex (he was taking a large dose which research has found to elicit headaches). Instead, the following supplements were advised:

Within a few days of starting the low histamine diet and taking the recommended supplements, David noticed a dramatic improvement in his symptoms. His nausea and abdominal pain had completed disappeared. He was feeling less fatigued and he only experienced very mild joint aches. Although his headaches and brain fog still persisted, they were much better and he reported a 70% improvement in severity, frequency and duration of symptoms.

David found that he had improved mental clarity for teaching compared to previously. He was also able to go back to gentle exercise in the gym which he hadn’t been able to do since his illness began.

David felt that the symptom relief had reduced his anxiety about his health and he no longer suffered panic attacks.

David continues to reintroduce foods at a gradual pace, but now has much more variety in his diet. He still avoids gluten and caffeine, and has reintroduced small amounts of dairy. He aims to eat at least 7 different coloured vegetables and fruits every day to nourish the healthy gut bacteria, and combines this with a balanced diet of good quality protein and healthy fats.

He has recently added in a highly bioavailable multi-nutrient which includes good levels of vitamin B12 in light of his mostly plant-based diet, BioCare Male Multinutrient (two capsules daily). As he has increased soluble fibres in his diet and gut symptoms have improved, David has discontinued the Invivo Bio.Me Prebio PHGG powder.

David is aware that this is a paced, long-term strategy and continues under regular nutritional therapy follow-up for further support and adjustment to his dietary, lifestyle and supplement protocols.

This case study was written by Melanie Dixon, one of our nutritional therapists, who you can book a consultation with here.

Nutritional therapy focusses on identify and addressing the root cause of disease. Nutritional Therapists use a holistic approach to health, taking into account the whole person, including their health history, diet, genetics, stress and lifestyle factors, not just treating individual symptoms. Nutritional therapy is not a one-size-fits-all approach - it’s personalised, preventive and participatory healthcare. Using the principles of functional medicine, along with functional lab tests, nutritional therapists are able to create therapeutic dietary and supplement plans, and lifestyle interventions which target specific imbalances in the body in order to restore balance and support optimal health. Many individuals experience symptom alleviation, improved health and remission of chronic health conditions.