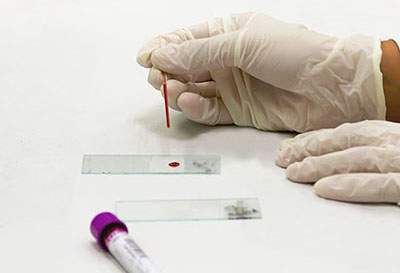 Impairments in cognitive function are known to have multiple possible causes. Nutrient deficiencies, metabolic disturbances, toxins and poor digestive health might all play a role. It can be useful to ‘cover all your bases’ by boosting your nutritional intake and making healthy changes to your lifestyle. However, for more nuanced, tailored support, there are a number of tests that can show you where to target your efforts more accurately. Have a look at our list of some of the most common tests your doctor or nutrition practitioner can advise on:

Suboptimal intake of micronutrients – vitamins, minerals and other compounds found in foods such as plant polyphenols – can have negative effects on cognitive ability for people of all ages as the brain needs these substances for healthy structure and function. Testing for nutrient deficiencies allows you and your nutrition practitioner to identify areas for possible dietary and supplement modifications. Here are some key nutrient tests that might be helpful:

Organic acids test – this urine test can give an insight into how well your body’s biochemical processes are functioning. The processes examined include energy production in the cells and metabolism of neurotransmitters, both of which are crucial in supporting the brain. As each biochemical process requires a specific set of nutrients to support it, your nutrition practitioner can use the results of an organic acids test to identify any nutritional gaps.

Amino acids test – this test can be done on urine or blood, and gives an indication of your intake, absorption and usage of these important substances needed to create your body’s proteins. Optimal function of the brain and the creation of its chemical messengers – neurotransmitters – depends on the availability of a range of amino acids. Identifying problems in these areas can therefore be helpful to support cognitive performance.

Fatty acids test – this blood test examines the membranes surrounding your red blood cells to determine their fatty acid composition. It gives an indication of your intake levels of the different kinds of fatty acid, such as Omega-3 and Omega-6, as well as your ability to metabolise them. The fatty acid proportions in these cell membranes are closely associated with cognitive health as the brain, its messengers and the nervous system depend on fatty acids for structure and function. Testing can inform your dietary strategy for restoring and maintaining optimal fatty acid balance.

Homocysteine test, a blood test, measures blood levels of the amino acid (protein) homocysteine. Abnormally-high levels of homocysteine can cause damage to the insides of blood vessels, raising the risk of blood clots and cardiovascular disease. Importantly, raised homocysteine increases the risk of cognitive decline and dementia.

Elevated levels of homocysteine in the blood can indicate that it is not being broken down adequately for use in the construction of the protein molecules your body needs. The B vitamins – vitamin B12, vitamin B6 and vitamin B9 (folate) – are needed in sufficient quantities and proportions to carry out homocysteine metabolism, so this test can indicate a need for these nutrients.

Mineral analysis is most accurately carried out using samples of blood or urine. Tests look for imbalances in the body’s levels of mineral nutrients such as calcium, magnesium and zinc so that the need for dietary or supplemental minerals can be determined. Imbalances in nutritional minerals can affect the smooth functioning of metabolic and other body processes and are associated with cognitive decline.

The accumulation of certain heavy metals in body tissues is associated with cognitive decline. Metals such as cadmium, lead, arsenic and mercury are picked up via environmental exposure and can bind to the body’s cells inappropriately, disturbing their function and causing inflammation. Tests are available to detect elevated levels of these toxins and to ascertain the efficiency of your body’s detoxification systems:

Toxic exposure testing is usually carried out using a urine sample. Assessment is made of the body’s levels of toxic heavy metals so that ongoing exposure can be identified and reduced and, where appropriate, a nutritional strategy can be tailored to detoxify the specific elements. This test is especially useful for anyone who has had occupational exposure to chemicals used in manufacturing, mining, painting, construction, farming and a range of other industries.

Tests that determine the health of the digestive system can be a useful way to detect potential sources of inflammation in the gastro-intestinal tract that might be causing or perpetuating brain fog and other cognitive dysfunction. The following tests can be undertaken together or individually.

Gut microbiome profiling is carried out on a stool sample and can reveal imbalances in gut bacteria and other microbes. Beneficial gut bacteria normally keep the mucous lining of the gut and the cells of the gut wall in a healthy condition. If these friendly microbial colonies are disturbed, the mucous lining can be depleted and the gut wall inflamed or damaged. This can impact digestive health and send inflammatory messengers around the body and up to the brain. The problem may be compounded if the gut wall allows inadequately digested food, bacteria and other unwanted substances to pass through into the bloodstream, triggering an immune or inflammatory response that has potential to irritate the brain. An analysis of the composition of the gut microbiome can allow your nutrition practitioner to tailor dietary and potential prebiotic and probiotic solutions to your gastro-intestinal environment.

Gut permeability assessment – blood, stool and urine tests can be used to measure levels of the protein zonulin in the intestine. Zonulin is released from the gut lining and acts on the permeability (porous nature) of the gut wall. If permeability is increased, unwanted substances may pass into the bloodstream and provoke inflammation. Blood levels of zonulin have not proven to be as reliable a marker for gut permeability as stool samples and urine samples. Urine samples are tested after ingesting two kinds of sugar molecules (lactulose and mannitol). The levels of these sugars in the urine indicate the extent to which they were able to pass through the gut wall. Confirmation of increased gut permeability can inform dietary strategies so that zonulin-triggering foods such as gluten may be eliminated.

Stool tests can also be used to detect and measure other markers that give an insight into the health of the gastro-intestinal tract:

Dysregulation in the body’s control of blood glucose levels is a key cause of vascular and systemic inflammation and is tightly associated with cognitive impairment. Some key tests can determine how well your body is regulating your blood glucose levels so that you and your doctor can take steps to regain optimal levels.

HbA1c test, a blood test, essentially indicates how sugary your blood has been over the last three months. Proteins are examined for the effects of glycation – that is the fusion of glucose molecules to protein molecules. An elevated result can indicate that your body has not been able to bring down blood glucose levels adequately, suggesting insulin resistance (a state of chronically elevated insulin that leads to cells becoming desensitised to insulin’s requests to take in glucose) or insufficient insulin levels as seen in type 1 diabetes.

Fasting insulin test, a blood test, can be useful to detect insulin dysfunction earlier than HbA1c testing. Blood glucose levels may continue to be normal while, hidden from view, cells have lost their ability to respond well to insulin and so insulin levels are abnormally high in an attempt to keep glucose in check. A fasting insulin test acts like an early warning system, allowing you and your doctor or nutrition practitioner to take steps to bring your insulin levels down and minimise the inflammation that can compromise the health of your brain.