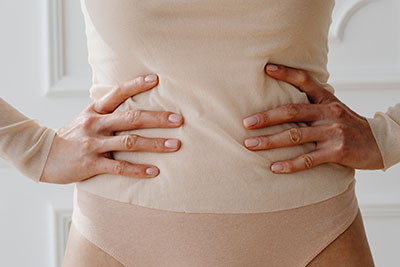 SIBO, or small intestinal bacterial overgrowth, is a type of condition affecting the gut. It often goes undiagnosed as the symptoms can overlap with those of IBS, or irritable bowel syndrome, a type of functional bowel disorder. Recent evidence estimates that over one-third of IBS sufferers test positive for SIBO. However, it can be associated with other clinical conditions and, left untreated, SIBO increases the risk of serious health issues.1,2

Treatment of SIBO often presents a challenge, particularly in those with recurrent relapses. Confirming SIBO with appropriate testing and assessing the individual’s history and symptoms to assess underlying factors can enable effective, personalised therapy using a combination of dietary, lifestyle and nutraceutical approaches.3,4

This article explores SIBO, the myriad of symptoms, potential causes and underlying factors contributing to the condition and the various treatment options available.

SIBO is considered a malabsorptive condition as a result of gut stasis, meaning that there is stagnation in the small intestine due to slow gut motility.3,5

Gut bacteria have many important roles in the body, one of the main ones being to aid digestion. They ferment carbohydrates from our diet, producing natural by-products of gas, typically methane and hydrogen. Whereas this process normally happens in the large intestine, in SIBO the gas builds up in the small intestine instead, which leads to uncomfortable and distressing symptoms.6

Signs and symptoms of SIBO

There can be many different symptoms associated with SIBO, and the most common ones include:2,5,7,8,9

However, other non-gastrointestinal symptoms which people may not realise are related to SIBO include brain fog, anxiety and low mood, aching joints, fatigue and weight loss.

There are different types of SIBO which vary in their characteristic symptoms and types of gas produced. These include:2,6,7

Hydrogen-producing bacteria and methane-producing Archaea are present in the small intestine, resulting in mixed symptoms, such as alternating diarrhoea and constipation.

Less common than other types of SIBO, partly due to the fact that there are no direct tests available in the UK currently. However, there is now a test available in the US called Trio-Smart (https://www.triosmartbreath.com/) which measures for hydrogen, methane and hydrogen-sulphide. Tell-tale signs of hydrogen-sulphide SIBO include constipation, abdominal pain and bloating, sulphur-smelling flatulence, bladder pain and heartburn.

Hydrogen-producing bacterial overgrowth accounts for nearly 50% of SIBO cases, methane overgrowth at just under 40%, and the remaining cases producing both hydrogen and methane gases.

Whilst there are clear links between SIBO and IBS, there can be many other causes. Often it is a combination of factors causing poor gut motility, digestive dysfunction, impaired gut lining and an imbalance of gut bacteria, known as dysbiosis.1,2,5,7,9,10,11

Dysbiosis: an imbalance of gut bacteria, where healthy bacteria are crowded out by pathogenic bacteria. Factors include antibiotic treatments, a diet high in sugars and refined, processed carbohydrates, low fibre intake, stress, gastritis, Helicobacter pylori or a food-borne infection.

Medications: PPIs such as omeprazole, non-steroidal anti-inflammatories and antibiotics are known to influence digestion and the microbiome.

Who is more at risk of developing SIBO?

IBS sufferers carry a five-fold risk of developing SIBO, with increased odds in the female gender, older age and those presenting with diarrhoea.1

Conditions most commonly associated with a higher risk of SIBO include, but are not limited to:2,5,9,10,12

The most common way to test for SIBO is using lactulose and/or glucose breath testing. This measures how much methane and hydrogen gas is being produced in the small intestine and is easily performed at home.2,10

Hydrogen and methane gases are measured in response to oral administration of lactulose (a type of sugar consisting of fructose and galactose). If bacteria start to break down lactulose in the small intestine before it enters the large intestine at around 90 minutes, there will be an increased production of hydrogen and/or methane gas which would confirm a positive test. Once lactulose reaches the large intestine, it is normal to see a second increase in the production of gas.

Hydrogen and methane gases are measured in response to oral administration of glucose (a simple monosaccharide sugar). As with the lactulose breath test, if the bacteria start to break down glucose in the small intestine, gas will be produced, resulting in a positive diagnosis of SIBO.

How to interpret breath test results

A positive SIBO test shows an increase from the basal rate within 90 minutes of 20 ppm (parts per million) for hydrogen, 12 ppm for methane or a combined measurement of 15 ppm for both hydrogen and methane. If constipation was noted at the time of testing and the methane gas measurement is greater than 3 ppm, then a practitioner may also consider this a positive test.13,14,15,16

If the test shows a flat line over the three hours of testing, this could indicate hydrogen sulphide SIBO, but direct testing for this is only currently available in the US via Trio-Smart. The prac titioner will carefully assess the results and clinical presentation to decide whether treatment is indicated.16

What is the difference between the glucose and lactulose breath test?

The main difference between lactulose and glucose breath testing is that glucose is absorbed more quickly than lactulose and doesn’t always reach the distal section of small intestine.

A glucose test rarely gives false-positive results, but because SIBO can be lower down in the small intestine, it could produce a false-negative result.

A lactulose test rarely gives false-negative results, but because it can travel through the small intestine quickly, for example if the person has diarrhoea, it could lead to a false-positive result.

For best results, it may be prudent to test with glucose and lactulose to assess the whole of the small intestine and reduce the risk of false-negative results.16

Are there other ways to diagnose SIBO?

Other tests can indicate whether someone potentially has SIBO, however they do not clearly define which type and so a subsequent breath test would still be advised to enable effective therapy.

This is considered the gold standard of testing which involves taking some bacteria from the small intestine and growing it in a petri dish. However it is expensive, there can be issues with bacterial contamination and it tends to only be used rarely in some clinical research settings.2,10,16,17

Research is currently looking at the association between faecal calprotectin, a stool test used to measure levels of inflammation, and the prevalence of SIBO in rheumatic disease such as systemic sclerosis. It is suggested that this could serve as a quick, non-invasive and relatively cheap diagnostic tool for SIBO.18.19

This nutrient evaluation test can be used to assess metabolic biomarkers in the urine and can be performed easily at home. If elevated levels of 4-hydroxyphenylacetate are present (a by-product of specific Clostridia bacteria), this may indicate SIBO or other small bowel disorders.16,20

This home test can provide useful markers for SIBO and digestive capacity. Specific indicators to watch for include:21

What treatments are available for SIBO?

There are several different treatment options for SIBO. Effective eradication typically involves a combination of antibiotic or antimicrobial therapy, low fermentable-carbohydrate diet and nutraceuticals to support healthy digestion and a balanced microbiome. Addressing the underlying factors is key to minimising the risk of relapse.18

Rifaximin has been widely researched and used as a safe and effective antibiotic therapy for SIBO as it only absorbs in the small intestine and is less likely to affect the balance of the large intestinal bacteria. This is generally administered for between 10 and 14 days. However, there may be a higher risk of relapse with antibiotic treatment.12,24,25,26

Herbal anti-microbials have gained popularity as a cheaper, safe and equally effective alternative to antibiotic therapy.

A combination of herbal antimicrobials should be considered for eradication of SIBO, depending on which type you have. These are taken for around 6 to 10 weeks, depending on symptom response. These include:

Oil of oregano and berberine are herbs commonly used to target hydrogen-producing bacteria, whilst allicin (garlic extract) is effective in killing off methane-producing bacteria. Neem is another herbal preparation which is beneficial in eradicating pathogenic bacteria involved in SIBO.11,23,24

Specific fermentable carbohydrates which are usually considered part of a healthy diet, can be problematic in SIBO because they feed the bacteria which are growing in the small intestine. By starving them, it helps to stop their overgrowth. Several different diets use this principle (such as the low FODMAP or biphasic diet) with the main foods to avoid being:

This type of elimination diet is generally used alongside antimicrobial therapy for up to 12 to 16 weeks. Foods are then reintroduced gradually at the end of therapy to avoid nutrient insufficiency and deficiency and to help encourage repopulation and diversity of healthy gut bacteria.10, 16, 27

What lifestyle changes can help to eradicate and prevent SIBO?

Identifying underlying factors is crucial to help eradicate and prevent the relapse of SIBO. Lifestyle or therapeutic strategies may involve:10,11,28

Nutraceutical supplements to aid digestion and motility, calm inflammation, support the gut lining, replenish essential nutrients and encourage a healthy diversity of gut bacteria are important factors in the treatment of SIBO. Common supplements used, depending on the individuals needs include:

SIBO can be a difficult condition to treat and overwhelming due to its complexities. Consulting with a qualified SIBO practitioner or registered Nutritional Therapy can provide tailored support to guide you through successful therapy and help lessen the risk of relapse in the future.