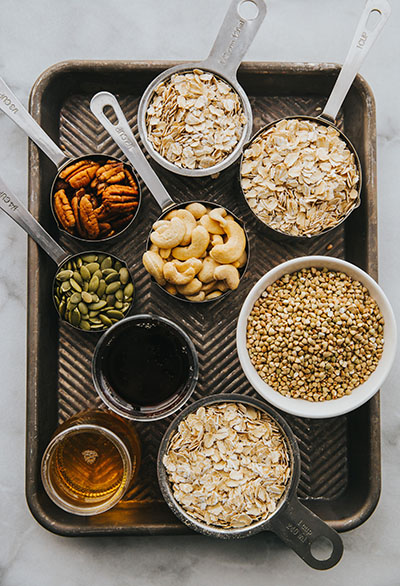 What foods are gluten-free and what foods to avoid if you're Coeliac or gluten sensitive.

Coeliac Disease is a condition which causes your immune system to attack the lining of your small intestine whenever gluten is ingested. This can cause nutritional deficiencies, stomach pain, digestive issues, joint and muscle pain, weight loss, fatigue and many other symptoms

If you’ve been diagnosed with Coeliac disease it’s vital that you completely avoid all gluten containing foods or products, as even small amounts can trigger the condition and damage the gut lining further.

If you have a gluten sensitivity, it can be helpful to completely remove gluten from your diet for a month or so to avoid further irritation of the gut. Some people may be able to tolerate small amounts of gluten in their diet after a short break from gluten and once their gut health has improved, whilst others may need to avoid gluten completely. It’s also important to consider other factors which could be affecting your digestion unrelated to gluten, such as difficulty digesting wheat or other foods containing FODMAPs, which you can read about here .

So you’ve been diagnosed as having Coeliac disease or you have non-coeliac gluten sensitivity (NCGS), what can you eat?

A good place to start is to read the ingredients on the back of food products. UK legislation requires companies to highlight allergen ingredients in bold, including ingredients containing gluten. Some supermarkets now also have ‘free-from’ sections offering a range of gluten-free products.

Coeliac UK has created a crossed grain logo to indicate which food products are certified gluten-free, to help you easily identify gluten-free products. You can read more about this here . However, not all companies are using this therefore it’s still important to check the ingredients list.

Some restaurants mark gluten-free meals with ‘GF’. If this isn’t clear on the menu, don’t hesitate to ask the restaurant to check if a meal is gluten-free.

● Triticale - used in breads and cakes.

● Oats only if specifically labeled gluten-free (regular oats can be contaminated with gluten).

● Some non-food based products may contain gluten such as cosmetics, medications, nutritional supplements, herbal medicines, wheat-based play-dough and communion wafers.

● Soya (except in soy sauce)

*Note this is not an exhaustive list. Coeliac UK has a more comprehensive gluten-free checklist which you can download here for more information.

Following a gluten-free diet doesn’t have to be complicated. The main gluten-containing foods include cakes, biscuits, bread, pizza bases, crackers, pasta, breakfast cereals and oats (unless labeled gluten-free). Watch out for hidden sources of gluten too such as crisps, chips and plant-based meat alternatives, and even some cosmetics and medications. Foods that are naturally gluten-free include rice, potatoes, meat, fish, beans, fruits and vegetables.